Before the winter of 2018, the last time we were able to ice skate the canals of Amsterdam was in February 2012.

Table of Contents hide
1 Before the winter of 2018, the last time we were able to ice skate the canals of Amsterdam was in February 2012.
2 How Amsterdam’s Water Company facilitates ice skating on the canals
3 These Amsterdam canals will be allowed to freeze over during Phase 1
4 Here’s what else happens when Amsterdam’s canals are frozen
5 Video: ICE Amsterdam
6 Video: Ice skating in ‘Old Amsterdam’ style

This year, the ice never really got thick and strong enough to be officially declared ‘reliable.’

Nevertheless, thousands of people took the to canals. The fact that dozens of people broke through the ice did not seem to discourage anyone.

But now the skates can be greased-up and stored again:

STAY OFF THE ICE, Amsterdam police warns. The ice that still remains is extremely unreliable.

Venturing onto the ice does not only endanger your own life, but also the lives of emergency personnel.

Since there is no outlook for a new period of frost, Waternet has opened the Eenhoornsluis lock and lifted its boating ban.

Meanwhile, a Waternet icebreaker traversed the canals to break up any remaining ice.

Thaw set in this afternoon, and temperatures are expected to rise tomorrow and throughout the week.

Police now cautions people not to venture onto the ice.

No doubt lots of people will venture onto the ice today.

But this afternoon thaw sets in, with a daytime high temperature around 3° Celsius (37.4° Fahrenheit).

Sunday sees even higher temperatures, as well as some rain. That pattern will continue through the week.

The ice on the canals has not been officially declared to thick enough, but lots of people are taking the opportunity to skate:

And this guy is one of several people who today discovered that yes, the ice is indeed unreliable:

Police and Waternet say the ice is still unreliable, but the first few skaters — here on Keizersgracht — have been spotted:

Oh, did we mention that the ice is still unreliable?

Talk to old locals in Amsterdam and you hear stories about winters the likes of which we haven’t seen in recent memory.

Weather is always a topic of interest, especially in a country of which it is said — more or less jokingly — that you can experience four seasons a day. 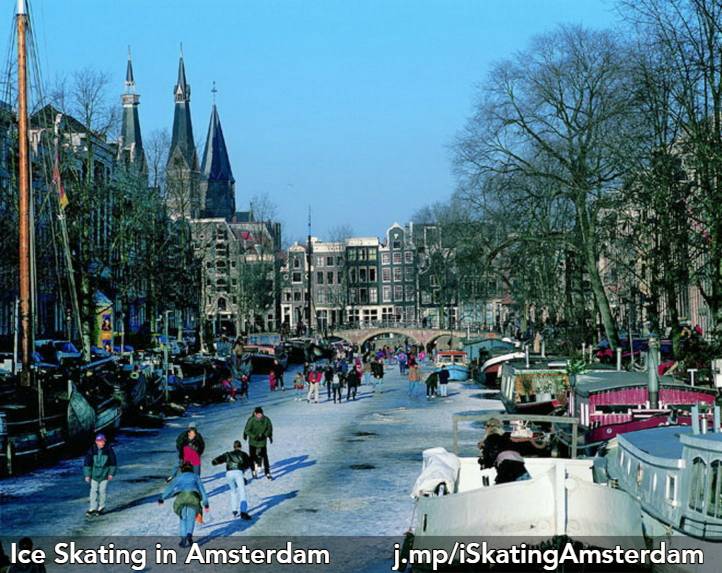 Ice skating on the canals of Amsterdam. 1

The weather in the Netherlands isn’t really all that fickle, but fact is that the climate has been changing over the past years. Noticeably so.

Whether or not it is due to global warming, we don’t know. But we’ve had quite few relatively mild winters these past few years.

Then again — as we say in our February Amsterdam Weather article — the weather in just about any given month can be quite different from year to year.

In February 2012 a big freeze kicked in. I can assure you that we had not seen weather that cold in a long, long time — even though February usually is the coldest month of the year.

And yes, the canals froze over with ice strong enough to safely carry lots of skaters (and walkers, and bicyclists).

Come we now to February 2018. Will we be able to skate on the canals again?

The weather forecast does seem promising.

How Amsterdam’s Water Company facilitates ice skating on the canals

When it looks like its going to be freezing long and strong enough for a while, the Amsterdam city council instructs Waternet — the Water Company for the area of Amsterdam and surroundings2 — to put into action the so-called IJsnota (literally, Ice memo).

This ‘ice protocol’ enables Waternet to set in motion various processes that may, if the weather cooperates, eventually make it possible for people to skate the canals.

Waternet would shut a number of locks — and stop or slow down pump stations — in and around the city. That causes the flow of water through the canals to slow down, facilitating the formation of ice. Normally fresh water from the river Amstel flows through the city’s canals into the river IJ.

The company would also issue a sailing prohibition for certain canals. Boats are then not permitted to sail through (sections of) these canals in the center of Amsterdam, including Prinsengracht, Leliegracht and Keizersgracht. 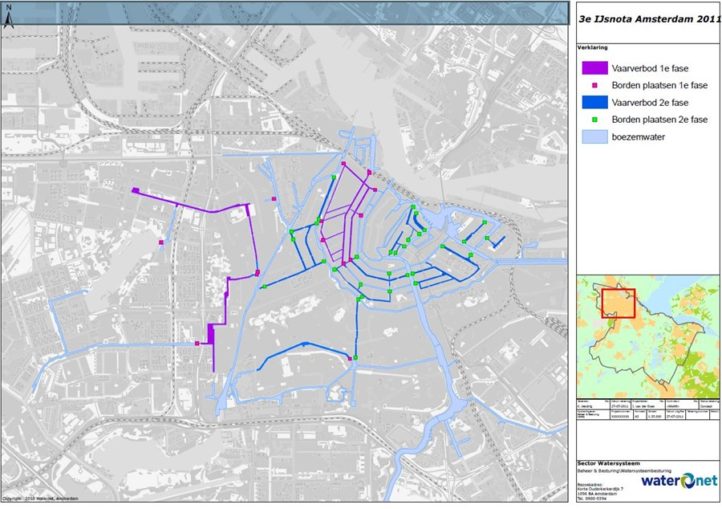 In the center of Amsterdam, most of these canals are located within the Jordaan area.

Mind you, Waternet reminds people that a boating ban does not mean it is safe to venture onto the ice just yet.

Details for Phase 2 will be posted when it happens :)

Here’s what else happens when Amsterdam’s canals are frozen

A lot more happens on the frozen canals than just ice skating. You’ll see people strolling — some carrying shopping bags, bicycling(!), or enjoying hot chocolate, hot dogs, and whatever else is on sale.

Some house boat dwellers see the ice as a window of opportunity, and sell hot drinks and other goodies from their canal-facing kitchen windows.

The video below is titled ‘Ice Amsterdam’ — a playful reference to Amsterdam’s marketing slogan, I Amsterdam

This beautiful video was shot by Jaap van den Biesen and Justin Knaven, using a Canon 7D and Glidecam HD2000.

The song is called ‘To Build A Home’ by Cinematic Orchestra.

This video, produced by Yoran Staas of YESimages, is shown in 8mm retro style – like an old 20’s movie.

Staas says he was inspired by the black-and-white Dutch TV commercials for Old Amsterdam cheese. Those ads featured a song by Flemish artist Kris de Bruyne. Click the link to view those commercials — along with a translation of the song’s lyrics.

Keep an eye on the weather in Amsterdam

Category: NewsRelated to: Canals, ice skatingLast updated: Wednesday, March 28, 2018 at 11:38 AM, Central European Time (CET)
Transparency:
The DutchAmsterdam website includes affiliate links. That means we get a small commission — at no additional cost to you — for each purchase you make. Your support helps us provide this site free of charge. Naturally, as our Editorial Policy states, our content is never influenced by our advertisers or affiliates.