The I amsterdam letters

And no, there is no ‘I amsterdam’ or ‘I love Amsterdam’ sign.

We’ll explain the meaning of the sign. But first: 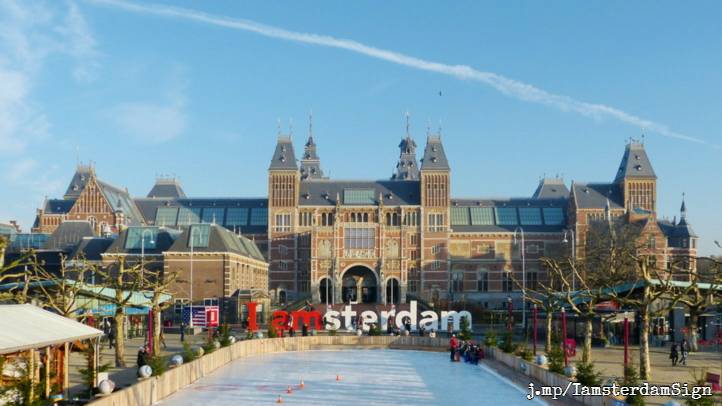 The main I amsterdam letters at the back of the Rijksmuseum. Photographed in the winter, when the reflection pool is used an an ice skating rink.

That’s it. The ‘I amsterdam’ letters were removed at 8 AM this morning.

The set of letters will now be refurbished. Later it will again be on display, popping up in various locations around town — albeit not in the city center.

Meanwhile, you can still take selfies with the smaller versions of the sign, such as the one located at Amsterdam Airport Schiphol.

I amsterdam letters will be removed in December

Update: Saturday, November 24, 2018 — If you still want to see the ‘I amsterdam’ letters you have to be quick. The 2-meter tall sign will be removed from Museumplein on Monday December 3, or on Tuesday, December 4, 2018.

Hosts will, during the rest of the month, direct disappointed tourists to other locations in the city where smaller versions of the popular sign may be viewed.

Some other Dutch cities, as well as a miniature theme park, had expressed interest in buying the set of letters.

However, The original sign — the largest version — will be placed in storage for now.

Fortunately it looks like this set of letters will eventually also pop up in various locations around the city — as was originally planned.

Update: Thursday, November 8, 2018 — It’s official: the iconic ‘I amsterdam’ sign, which features in hundreds of thousands of tourist photos and selfies — is history.

The set of huge letters will be removed from Museumplein after a majority of city council members voted in favor of a GroenLinks (GreenLeft) motion.

GreenLeft politicians targeted the marketing slogan as part of their response to overtourism. (Oddly, they also claimed that the slogan was a “symbol of increasing individualism.” Weirdness and politics go hand-in-hand, after all).

No word yet on what will happen with the smaller sets of letters that often pop up in various spots around town.

Many Amsterdammers concerned about the negative effects of mass tourism applaud the decision to remove the letters. Many others disagree for a variety of reasons.

Among others things fans of the sign decry GreenLeft’s “patronizing” claim that the set of letters “stands for individualism.”

A good many citizens see the decision as a prime example of gesture politics.

Too Successful — Letters May Be Gone Soon

Update: Wednesday, October 10, 2018 — It looks like the letters will soon be gone — and, some Amsterdammers think, none too soon.

Like many other cities throughout Europe, Amsterdam has in recent years been suffering from over-tourism. This city of 850.000 people is currently visited by 8 million tourists a year. That is simply too much of a good thing.

A majority of Amsterdam City Council members now wants to get rid not just of the letters, but also of the marketing campaign they stood for.

Mind you, for now this is just a ‘motion’ — suggested by Groenlinks, the current majority party in Amsterdam. Or, depending on your perspective, ‘symbolism politics’. That is what Frits Huffnagel, who in 2004 as alderman for Economic Affairs commissioned the letters.

According to GroenLinks the slogan has become a symbol for mass tourism and individualism in a city which stands for solidarity and diversity.

“Iamsterdam stands for individualism while we want a city which stands for solidarity and diversity,” said Femke Roosma, leader of the GroenLinks group on the city council. “In addition, the slogan reduces the city to the backdrop of a marketing story.”

The motion was accepted by the full city council, and it may well turn out that the letters will be removed within weeks.

Launched in September, 2004, the sign — at the back of the Rijksmuseum — has become one of the city’s most photographed icons. You rarely see the letters without people in front, behind, or on top of the slogan — taking photos and selfies which help market the city through social media.

Amsterdam Marketing happily estimates the letters are photographed some 6.000 times a day. ‘Happily,’ because the original intention — marketing Amsterdam abroad in the wake of the financial crisis — has worked far beyond expectation.

In fact, now that (according to a growing number of locals) Amsterdam is “overrun” with tourists, many Amsterdammers believe the sign has worked too well. They say the slogan has overstayed its welcome.

Amsterdam’s 800.000+ residents in 2016 saw an estimated 12 million visitors — from the Netherlands and from abroad — visit their city. As many as 42 million people are forecast to visit the Netherlands annually by 2030, up from 18 million in 2018. Amsterdam receives the bulk of those visitors, leading many locals to complain that they now ‘live in an overcrowded theme park.’

The marketing folks, meanwhile, have changed their focus from attracting tourists to promoting the city as an ideal place to do business, organize international conferences and congresses, and locate or relocate company headquarters or satellite offices.

Taking a photo of the I amsterdam sign without anyone in front or on top of it is, well, quite a challenge.

What is the meaning of the I Amsterdam sign?

The sentiment behind the slogan was, ostensibly, to make Amsterdammers feel good about themselves:

Indeed, Quality of Life surveys — used by international companies to decided where to locate their offices — generally rank Amsterdam highly.

The I amsterdam sign and its shadow, as seen on the 3D version of Google Maps

Until its removal, the main set of letters was located at the back of the Rijksmuseum, the Netherlands’ premier art museum — just a stone throw from the Van Gogh Museum (which houses the largest collection of paintings by Vincent van Gogh (1853-1890) in the world).

Another set of the I Amsterdam letters is still found at the plaza of Amsterdam Airport Schiphol.

Meanwhile a third, smaller version travels around the city. It pops up at events — such as fashion shows, fairs, festivals and congresses — but also at museums, along the river IJ, or just about anywhere else.2 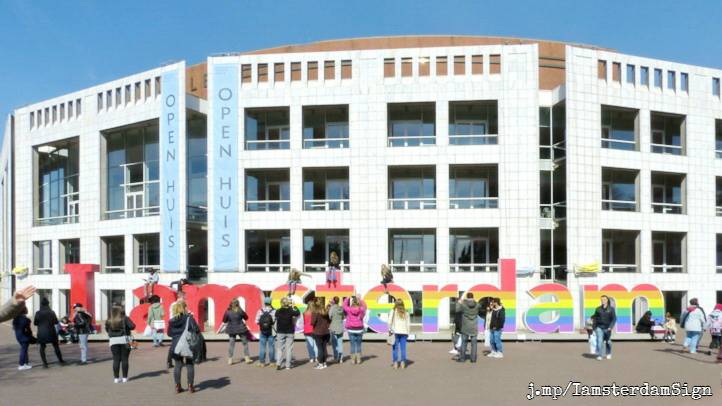 No joke: On April 1, 2016 the move-about sign was decked out in rainbow colors to celebrate the fact that the Netherlands was, 15 years earlier, the first country in the world to legalize gay marriage. The first weddings were held in Amsterdam.

Finally, a scaled-down version lives in the courtyard of the Amsterdam Museum (a must-see, by the way).

And of course you’ll find the I amsterdam phrase printed on every imaginable souvenir.

The Brief Return That Didn’t Happen

Though the beloved set of letters were removed from Museumplein only just three months ago, the City council recently announced they would be back — albeit for two days only: Tuesday and Wednesday, March 19 and 20, 2019.

They were going to be used as an advertising gimmick of sorts, meant to draw attention to the States-Provincial council elections on Wednesday, March 20, 2019.

In fact for this occasion the letters would be accompanied by a giant red ‘voting pencil’ as well as a voting booth.

Salient detail: the temporary return of the letters was suggested by Amsterdam Mayor Femke Halsema, whose political party GroenLinks banned the sign in the first place.

Hypocrisy in politics. Nothing new under the sun.

Well, this Tuesday (March 19, 2019) the City crawled back, saying the letters will now not be displayed. The reason? According to a spokesperson for the City: yesterday’s deadly shooting incident — believed to be an act of terrorism — in the city of Utrecht.

Category: About AmsterdamRelated to: I amsterdam sign, tourismLast updated: Saturday, November 23, 2019 at 3:06 PM, Central European Time (CET)
Transparency:
The DutchAmsterdam website includes affiliate links. That means we get a small commission — at no additional cost to you — for each purchase you make. Your support helps us provide this site free of charge. Naturally, as our Editorial Policy states, our content is never influenced by our advertisers or affiliates.