Work has commended on the redesign of Rembrandtplein, one of Amsterdam’s favorite entertainment spots.

The popular square, named after Holland’s most famous painter, is lined with bars and nightclubs, eateries and small hotels — ranging from high brow to low brow and in places leaning heavily toward the worst end of tacky. 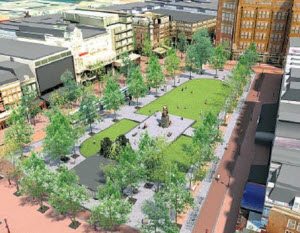 Prime example: the façade of nightclub Escape sports Europe’s largest digital screen, flooding the square with a steady stream of commercials. When its arrival was first announced Stadsdeel Centrum, the borough that oversees downtown Amsterdam, claimed the permit for the screen was handed out ‘by mistake.’

The same borough is now responsible for — in its terms — giving the square an international allure. If you’ve seen the redesigned Dam square, also located within the boundaries of the central city borough, you may be forgiven a certain measure of scepticism. However, the artist’s conception of the new Rembrandtplein does look quite nice.

The purpose of the make-over is to make the square — which aside from being a center of nightlife provides an important link between the heart of Amsterdam and the rapidly developing oastern part of the city — safer, cleaner, and more beautiful.

To this end, the bushes and fences will disappear — as will the group of 22 life-size bronze statues depicting Rembrandt’s painting The Nightwatch.

The statue of Rembrandt, the oldest statue in Amsterdam, will get a more prominent position near the center of the square.

The statue was placed in 1852 when the square was still called Reguliersmarkt (Regulators’ market — after the then nearby Regulators’ convent).

In 1876 the square was renamed in honor of the painter. Before then it was known as Reguliersmarkt, and was the scene of the city’s butter market.

The €3.5 million make-over project is scheduled for completion by December, 2009.

Category: News, Old City CenterRelated to: Rembrandtplein and Surroundings, squareLast updated: Sunday, March 10, 2019 at 8:07 PM, Central European Time (CET)
Transparency:
The DutchAmsterdam website includes affiliate links. That means we get a small commission — at no additional cost to you — for each purchase you make. Your support helps us provide this site free of charge. Naturally, as our Editorial Policy states, our content is never influenced by our advertisers or affiliates.