DutchAmsterdam.nl — British music magazine The Gramophone has declared the Koninklijk Concertgebouworkest (KCO), whose home base is the Amsterdam Concertgebouw, as the best orchestra in the world.

The magazine asked renowned international music critics to rank the world’s twenty best orchestras. They placed the Royal Concertgebouw Orchestra at the top of the list. 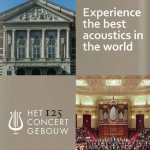 Ad for the Concertgebouw (concert hall) in Amsterdam

According to The Gramphone’s panel of music critics, the Royal Concertgebouw Orchestra has managed to retain its own sound in a world of globalization. The journalists say this is “unique,” particularly now that more and more orchestras start to sound alike.

Due to its highly regarded accoustics, Amsterdam’s Concertgebouw (literally, ‘concert building’) — after which the KCO is named — is considered one of the finest concert halls in the world.

Take a look inside the Concertgebouw.

On a personal note

I fell in love with the Concertgebouw — and with certain genres of classical music — as a young child.

My mother took me, my sister and brother to concerts. My father preferred his ever-growing collection of records — yes, the old 33RPM LPs, played on a rather ancient gramophone turntable.

But what really got me into the music was the fact that class 5 and 6 of my primary school would visit the Concertgebouw from time to time. There we listened to classical masterpieces as Die Moldau, Die Zauberflöte, Eine Kleine Nachtmusik, and many more — as directed and explained by the great Bernard Haitink.

Category: NewsRelated to: Concertgebouw, KCO, Koninklijk Concertgebouworkest, Royal Concertgebouw OrchestraLast updated: Sunday, December 16, 2018 at 12:17 AM, Central European Time (CET)
Transparency:
The DutchAmsterdam website includes affiliate links. That means we get a small commission — at no additional cost to you — for each purchase you make. Your support helps us provide this site free of charge. Naturally, as our Editorial Policy states, our content is never influenced by our advertisers or affiliates.