Home > Where to eat and drink > Coffeeshops > In 2010, will there be no more coffeeshops in the Netherlands?

© DutchAmsterdam.nl, Amsterdam — Two years from now, all coffeeshops in the Netherlands will have closed. So predicts Henk van de Bunt, professor of crimonology at the Erasmus University Rotterdam.

Criminology? Yes, Bunt is not talking about Starbucks and its more traditional predecessors, but rather ‘coffeeshops’ as in ‘establishments where cannabis can legally be bought and enjoyed.’

Note: We keep this archived article online for its historical value, as it provides context to later news on the same topic. If you’re interested in Amsterdam’s latest news on coffeeshops, you should see this.

Bunt is weighing in on a current discussion among Dutch politicians and mayors on whether or not the Netherlands should continue its policy of tolerance toward the sale and use of marijuana and other so-called ‘soft drugs.’ He made his comments in an interview with VNG Magazine — is published by and for the Association of Netherlands Municipalities.

Illegal, but not Illegal

Coffeeshops and the use of soft drugs have been tolerated in the Netherlands since the mid 1970s under a peculiarly Dutch approach known as gedogen. The term is difficult, if not impossible, to translate. It refers to an official policy of tolerating activities which technically are illegal. 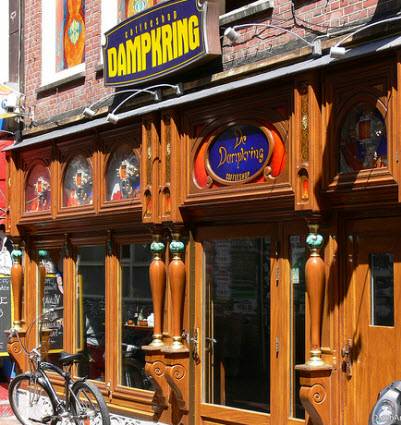 Known to many from the movie Oceans Twelve, this Amsterdam coffeeshop is at the top of the list for many cannabis smokers.
© Copyright DutchAmsterdam.nl. Want to use this photo?

As applied to coffeeshops, this policy reflected the desire to separate the sale of soft drugs from that of hard drugs.

By withdrawing the sale of Marijuana and hashish from the sphere of illegality, a barrier would be created between the use of soft drugs on one hand, and hard drugs on the other.

This division of markets would thus help discourage consumers of legal, relatively harmless soft drugs from getting involved with illegal, and harmful, hard drugs.

This pragmatic policy has puzzled observers throughout the world. After all, coffeeshops operate under an official license — which can be withdrawn if certain rules are broken.

Yet technically it is illegal for the coffeeshop to buy — and for others to supply — their merchandise, just as it is illegal to grow and harvest commercial quantities of marijuana. In the Netherlands, this situation is referred to as ‘legal front door; illegal back door.’

Still, by many accounts, Holland’s soft drugs policy has worked well. For instance:

On the other hand, there are drawbacks and controversies as well.

Drug Tourism
Last month the mayors of two towns in the South of the Netherlands have announced the closure of all coffeeshops — eight in total — within their municipalities. The reason? The nuisance caused by ‘drug tourists’ who cross the borders in search of soft drugs banned in their own countries.

“There are 25,000 drug tourists per week who visit these coffeeshops,” says Mayor Han Polman of Bergen op Zoom.

A 2007 report by Amsterdam’s Department for Research and Statistics shows that of the 4.5 million tourists who spend the night in Amsterdam during a given year, 26% visit a coffeeshop. According to the Amsterdam Tourism & Convention Board, 10% of tourists even mention this as a primary reason to visit the city.

Until recently Holland’s largest coffeeshop, Checkpoint, in Terneuzen (Zeeland, in the South-West of the country close to the border with Belgium) drew 2.500 customers a day — most of them from Belgium and France. The coffeeshop is now closed due to violations of the gedogen policy rules. 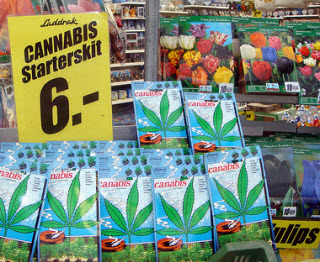 Cannabis Starter Kits amongst the tulip bulbs at Amsterdam’s Flower Market
© Copyright DutchAmsterdam.nl. Want to use this photo?

Barring foreigners from access to coffeeshops is not an option. A judge has declared that doing so amounts to discrimination, which is forbidden by Dutch law.

Health Concerns
Marijuana grown in the Netherlands is known for its high potency, with concentrations of THC — the main psychoactive substance found in the Cannabis plant — at around 16%, up from 8% in the early eighties. This provides a quicker, more lasting high, but various researchers suggest it also leads to development of a dependency on the drug.

Criminal Gangs
Tighter rules, new laws and increased police vigilance have made it much more difficult for small-time growers to operate. According to Henk van de Bunt, each year during the past few years, five- to six thousands weed growing operations are dismantled by Dutch police.

At the same time, coffeeshops are more or less forced to deal with criminal organizations. The latter tend to have sophisticated growing operations in out of the way places. Others rent houses, squat abandoned buildings, or even break into home of people who are on vacation in order to set up temporary weed farms.

They are not just supplying Holland’s coffeeshops. It is estimated that half of the Dutch cannabis users buy their supplies on the black market. At the same time, last month a Dutch police commissioner stated that the illegal export of Dutch-grown marijuana generates about 2 billion euros ($2.58) each year.

Dutch municipalities have much leeway in the application of certain federal laws within their communities. This is why the mayors of Bergen op Zoom en Roosendaal are able to close the coffeeshops in their towns despite the federal policy of ‘gedogen.’

Mayors of nearby town are now worried that their municipalities will see a sudden rise in the number of drug tourists. Therefore Gerd Leers, mayor of Maastricht, has called for a “Weed Top” — a conference to be attended by mayors of all border towns. He does not think it is a good idea for such towns to apply individual policies.

“That way you only replace the problems from one town to the next — and into illegality,” he claims.

“Together we’ll have to come to a conclusion,” Leers says. “Either we stop with our policy of gedogen, or The Netherlands is going to convince other countries to take a similar approach to the handling of problems surrounding drugs usage. As it stands now, border communities are victimized by differing approach in various European countries.”

The “Weed Top” conference will be held on Friday, Nov. 21, in Almere.

Meanwhile, the Maastricht city council has accepted a motion to move coffeeshops current located in the center of town to three “coffeecorners” at the outskirts of the city — close to the border with Belgium.

Mayor Gerd Leers says he prefers to maintain the policy of gedogen, and for now is interested merely in trying to minimize nuisance caused by hordes of drugs tourists by decentralizing the coffeeshops.

However, mayors of several towns in Belgium are up in arms. They have earlier threathened possible legal action if coffeeshops come too close to their municipalities.

The Christian Democratish Appèl (Christian Democratic Appeal : CDA), the biggest coalition partner in The Netherlands’s current cabinet, recently called for the closing of all coffeeshops. In fact, some 80 parliamentarians from a variety of political parties are said to support reigning in — or even getting rid off — the gedogen policy.

Since the two parties are diametrically opposed in their approach to soft drugs, CDA and PVDA in their coalition agreement agreed to not change Holland’s existing drugs policy. The resulting impasse has made it necessary for the mayors of the country’s municipalities to look for solutions themselves.

Amsterdam mayor Job Cohen disagrees with those who are calling for an end to the gedogen policy.

“Stopping the gedogen policy is taking the easiest route. But people forget why we started with it in the first place. That was the separation between soft- and hard drugs. In The Netherlands we still do this better than in any other place. Watch that don’t simply toss that out.”

According to Cohen a total ban on gedogen of soft drugs will be as ineffective as the prohibition in the US during the twenties.

Cohen says that in terms of public order and nuisance there really aren’t that many complaints, even while the coffeeshops draw many tourists. “No branch of business is so closely controlled as the coffeeshops. The owners know the rules they have to observe in order for their shops to remain open. We do have a problem with brawling Brits. But a joint does not make you brawl.”

Cohen does acknowledge there is a shadow side. “Undeniably there is a dilemma surrounding the legal front door and the illegal back door. Coffeeshops are almost forced to have ties with criminals.”

Mayors of many others towns agree. Among others the city fathers of Groningen, Utrecht, Eindhoven, Amersfoort, Nijmegen, Enschede, Den Bosch and Maastricht have indicated a willingness to ‘experiment’ with a different approach to the ‘back door’ supply of the coffeeshops.

None of the mayors wants to completely deregulate the coffeeshops.

Category: Coffeeshops, NewsRelated to: cannabis, Coffeeshops, NetherlandsLast updated: Wednesday, January 14, 2015 at 11:06 AM, Central European Time (CET)
Transparency:
The DutchAmsterdam website includes affiliate links. That means we get a small commission — at no additional cost to you — for each purchase you make. Your support helps us provide this site free of charge. Naturally, as our Editorial Policy states, our content is never influenced by our advertisers or affiliates.