(DutchAmsterdam.nl) In Amsterdam the area within the so-called belt of canals [seen here on a Google Map

] is referred to as Amsterdam Centrum.

Amsterdam’s city center is filled with history, still very much in evidence today. As a matter of fact, Amsterdam has more historic buildings and sites than any other city in the world — and most of them are located in the old center — an area compact enough to traverse on foot. Within the center you’re likely not more than a half hour’s walk from wherever you’re going.

Most guide books explain that Amsterdam’s medieval core is divided in an ‘Old Side‘ and a ‘New Side.‘

The two sides are separated by Damrak (the street that leads from Central Station to Dam Square) and Rokin (which takes you from Dam Square to Munt Plein). This traject used to form the final stretch of the Amstel River. In between Damrak and Rokin is Dam Square (Amsterdammers normally just say ‘De Dam’), and this is the place where early settlers built a dam in the river Amstel — thus giving Amsterdam its name. 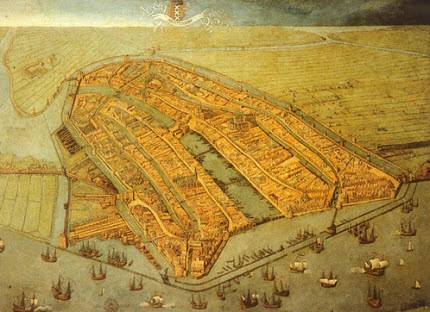 The oldest map of Amsterdam, painted in 1538. Click on the photo to go to Flickr, where you can see larger versions. Then click here to view a 1544 woodcut based on this painting.

Damrak and Rokin are now for the most part filled in and paved over, but as seen on this 1538 map of Amsterdam

they long served as canals.

In the 15th century the east bank came to be referred to as Oude Zijde (Old Side), and the west bank as Nieuwe Zijde (New Side). To-date, these terms are still used in the names of several streets and canals. For instance: Nieuwezijds Voorburgwal (which means, ‘New Side front fortified embankment’) or Oudezijds Achterburgwal (‘Old Side rear fortified embankment).

The name “Oude Zijde” is misleading because the New Side to the west is actually slightly older.

The terms came into use when — early in the course of Amsterdam’s rapid expansion in the 15th century — the church now referred to as the ‘Old Church’ (built in the 13th century) was no longer able to cope with a growing number of parishioners. Therefore a new church was built at Dam Square, and from then on the east side of town gradually became known as the Old Side — after the Old Side Parish.

The Old Side’s boundaries are

Contained within the Old Side is the (in)famous Red Light District, which is currently undergoing a controversial metamorphosis.

The Red Light District is bordered by the

– Zeedijk to the north and east,
– Nieuwmarkt and Kloveniersburgwal also to the east,
– Oude Hoogstraat and Damstraat to the south
– and Warmoestraat to the west

The New Side includes among other things the popular shopping streets, Nieuwendijk (New Dike) and Kalverstraat (Calves Street, a reference to the cattle market where cows, oxen and calves were traded until the year 1629).

In the early 14th century the western boundary was formed by a watercourse running along Nieuwezijds Voorburgwal (filled in 1884), but this was soon extended westwards to the Nieuwezijds Achterburgwal (now also filled and known as Spuistraat).

Around 1450 the Singel (Moat) was cut. This linked up with the Geldersekade and Kloveniersburgwal in the east to complete the moat around the medieval city, which received proper walls with fortified gates some 50 years later.
– Source: Lonely Planet, Amsterdam, 3rd edition

Category: About Amsterdam, Old City CenterRelated to: New Side, Nieuwezijds, Old Side, OudezijdsLast updated: Wednesday, May 18, 2011 at 11:09 AM, Central European Time (CET)
Transparency:
The DutchAmsterdam website includes affiliate links. That means we get a small commission — at no additional cost to you — for each purchase you make. Your support helps us provide this site free of charge. Naturally, as our Editorial Policy states, our content is never influenced by our advertisers or affiliates.