The construction of the Zeedijk (literally: sea dike) at the beginning of the 13th century meant that Amsterdam — which at that time was called Aemstelledam — was no longer subjected to regular flooding.

The Zeedijk later became part of a system of dikes that protected the city against the wild waters of the IJ and the Zuiderzee — a shallow but large inlet of the Northsea through which ships reached Amsterdam.

The protection and security provided by the dikes helped grow Amsterdam into an important harbor and business city.

The Zuiderzee later became the IJsselmeer when a dam, finished in 1932, cut off the inlet from the sea. This dam, the Afsluitdijk (literally, closing-off dike), was necessary to stop infrequent but disastrous flooding when significant storms pushed waters of the Northsea into the shallow inlet.

Amsterdam harbor was still connected to the Northsea by first the Noordhollands Kanaal (North Holland Channel), completed in 1825, and later the superior Noordzeekanaal (Nortsea Channel), officially opened in 1876. 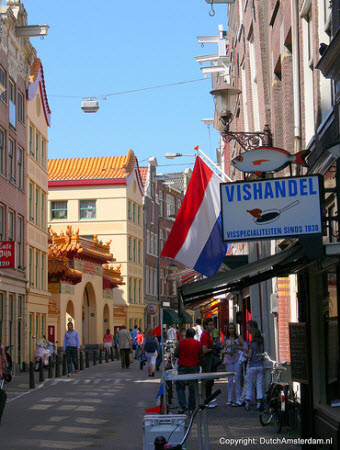 The Zeedijk, one of Amsterdam’s oldest streets.
© Copyright DutchAmsterdam.nl. Want to use this photo?

The Zeedijk is part of Amsterdam’s Chinese district (note that the street signs in this area are in both Dutch and Chinese), and also marks one of the boundaries of the Red Light District.

It features many authentic buildings, as well as original and restored gables. It is home to one of two remaining wooden houses in Amsterdam (Zeedijk 1, dating back to 1550), bars and pubs, fashion stores, restaurants and eateries, and even a Buddhist temple.

In the 17th century houses in and around the bend in the Zeedijk — roughly from numbers 31 through 44 — was one of the most prestigious places for rich merchants to live. When they later left for the Herengracht, the Zeedijk and surrounding area slowly transformed into a center for nightlife, entertainment and prostitution.

During the 1970s and early eighties the Zeedijk was a center for illegal street trade in drugs. The presence of desperate junks, pickpockets, street robbers and sundry violent criminals turned “De Dijk” (The Dike) — as the street is referred to in the neighborhood — into a no-go area for many people. Many locals moved away while several bars and other businesses closed and later re-opened as seedy dungeons that attracted even seedier customers.

In 1985 the city, pressured by the neighbordhood, took action. In cooperation with several private parties it set up an organization that bought, restored, and subsequently leased stores, bars and houses to legitimate merchants. Police regularly ‘swept’ the Zeedijk and surrounding area clean. To-date the Zeedijk is one of many spots the police keeps an eye on via a camera surveillance system.

With the downward spiral broken, the Zeedijk again became a popular street. Its many shops, boutiques, tokos, restaurants and eateries make it a popular destination for tourists and locals alike.

This metamorphosis provided as least some of the inspiration behind recent efforts to significantly clean up the entire Red Light District.

As alderman Lodewijk Asscher — one of the driving forces behind those plans — says, the city wants to recapture the historic city center in order to “give it back to the Amsterdammers.”

Where to Find Zeedijk

The easiest way to find Zeedijk is from Central Station (marked on the map below with a blue marker). With your back toward the station’s main entrance (currently a building pit for the new subway line), you face Damrak — the boulevard that leads to Dam square. If you picture the face of an analog clock, look at the large white building at 11:00 o’clock.

The building sports large blue neon letters that declare “Jesus Loves You.” Make your way toward this building. Zeedijk starts just to the left of it. (Tip: get something to eat or drink at the ‘Dwaze Zaken’ eatery at the corner. Good food, good value. Coffee quality is so-so, but tea is good, and they also carry an excellent selection of fine beers. It is operated by a Christian ministry, but in the 7 or 8 years that we’ve popped in here for something to eat no one has ever even mentioned God, Jesus, or the Bible to us.)

Tip: the restrooms (bathrooms/toilets) here are somewhat of a tourist destination. Bring your camera. Trust us on this one.

Category: Old City Center, Red Light DistrictRelated to: ZeedijkLast updated: Saturday, May 24, 2014 at 11:07 PM, Central European Time (CET)
Transparency:
The DutchAmsterdam website includes affiliate links. That means we get a small commission — at no additional cost to you — for each purchase you make. Your support helps us provide this site free of charge. Naturally, as our Editorial Policy states, our content is never influenced by our advertisers or affiliates.