‘Scam City’ Amsterdam was a scam

The National Geographic Channel has admitted that the Amsterdam edition of its ‘Scam City’ series1 does not paint a truthful picture of the city.

The program uses hidden cameras to document how scammers, pickpockets and other criminals go about their work in major tourist destinations around the world. 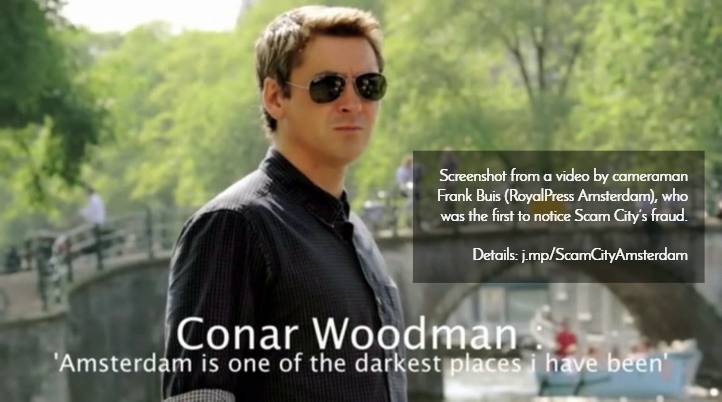 Screenshot from a video by cameraman Frank Buis (RoyalPress Amsterdam), who was the first to notice Scam City’s fraud. Yes, the name is misspelled.

In the fourth episode of the series’ second season2, presenter Conor Woodman declared, “Amsterdam is one of the darkest places I have been.” His statement was met with jeers and scorn on various social media websites, with people suggesting he must not have traveled much.

Woodman proceeded to portray Amsterdam as “one of Europe’s darkest cities” where tourists are not safe — matching the utter nonsense FOX TV’s Bill O’Reilly came up with in 2009.

The ironically-named ‘Scam City’ then used what turned out to be paid actors to stage various crimes including pick-pocketing and a robbery by a fake policeman.

The program’s production company assured National Geographic that the people portrayed were not actors, but rather criminals who were paid for their participation.

In the program Woodman play-acted as well, feigning shock at having been robbed, and later ostensibly tracking down one of the pick-pocketers (who later stated he had been paid 1800 euro for appearing in the program).

“The city is insulted,” Amsterdam Mayor Eberhard van der Laan said. “This looks like scam television. It could deter people from visiting Amsterdam.”

O come on Mr Mayor! Convicted criminals we caught on camera in the Amsterdam ep say they were only 'acting'. You believe that?!! #whatever

To-date, Woodman has not apologized for his role in the scam, just as he failed to do regarding a similar situation in the city of Prague. That city reportedly is considering legal action against National Geographic for damage done to its reputation.

Mayor van der Laan has also talked about taking possible legal action, but given National Geographic’s admission that appears to no longer be an option.

Amsterdam-based cameraman Frank Buis — known for his exclusive videos of royalty, international stars, and pick-pocketing criminals caught in the act3 — was the first to notice and document Scam City’s tricks in the Amsterdam show:

During a meeting with Mayor van der Laan, representatives of National Geographic agreed to post a Dutch-language statement on the city of Amsterdam’s official website:

“The National Geographic Channel On January 2, 2014 aired the program “Scam City: Amsterdam.” The city of Amsterdam has experienced this broadcast as harmful.

Many of the events presented in the program as real incidents were in fact staged, albeit after extensive research by the production company. We should have made that clear to the viewers.

Planned repeat showings of the program were put on hold immediately, and in an open dialogue with Mayor Van Der Laan, we agreed on this statement.

It was never our intention to harm the city of Amsterdam, and we regret the affair.”

The municipality adds that the TV channel’s statement meets the city’s expectations, and notes that the parties have therefore arrived at an amicable settlement of their dispute.4

Pick-pocketing and robbery in Amsterdam

Overall, Amsterdam is a safe city. But as in any big city in the world, it pays to protect your belongings.

So what about Amsterdam’s genuine crime figures?

In recent years the city has seen a sharp decrease in the number of reported pick-pocketing crimes.

In 2014, the same year the fake Scam City episode was broadcast, there was a 17% decrease in pick pocket incidents.

Every incident is one too many. Still, “internationally, Amsterdam is a safe city. Barcelona, Paris and Rome have much higher percentages when it comes to pick-pocketing incidents,” Amsterdam police chief Pieter-Jaap Aalbersberg said.

He ascribed the increase of reported pick pocketing incidents in the years 2013 to the popularity of smart phones — targeted by 55% of the pickpockets.

Roughly half of those street robberies involved a mobile phone, Aalbersberg said.

The perpetrators are, for the most part, young people — half of them between the ages of 12 and 17. And teens are their prime target.

The police chief says that in many cases the victims are also perpetrators. “It is as if they say, ‘my phone was stolen, so now I steal the phone of someone else’.”

According to the most recent annual Crime Index [2017] there has been a decrease in the most common types of crime.
Frank Buis documents many pick-pocketing incidents and arrests

Category: NewsRelated to: crime, Crime and SafetyLast updated: Sunday, July 30, 2017 at 9:42 AM, Central European Time (CET)
Transparency:
The DutchAmsterdam website includes affiliate links. That means we get a small commission — at no additional cost to you — for each purchase you make. Your support helps us provide this site free of charge. Naturally, as our Editorial Policy states, our content is never influenced by our advertisers or affiliates.