Amsterdam newspaper Het Parool, which publishes more Amsterdam-related news items than any other newspaper in Holland, today posted a story in both Dutch and English on its website:

AMSTERDAM – English is to become the official second language of Amsterdam. In public transport, the police force and City Hall English should become the official language, after Dutch, according to the proposal in Amsterdam made by Jan Paternotte, member of the Amsterdam City Council for the liberal-democrat party D66.

”In Amsterdam English is accepted everywhere, except at City Hall,” says Paternotte. ”Reporting a crime to the police can only be done in Dutch and local taxes are imposed solely in Dutch. However, English is undoubtedly the second language of the city, simply because it is the world language and a lot of American and British people live here or come over here for their holidays.” 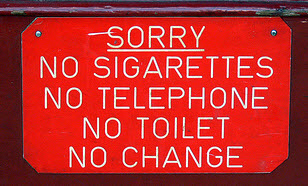 No Service? Sign on a café across from Amsterdam Central Station
© Copyright DutchAmsterdam.nl. Want to use this photo?

Public information from the city council and local boroughs should be available on the internet, according to the proposal by Paternotte. This way, foreigners could, for instance, find out when to put out their garbage bags.

Paternotte also wants Amsterdam to follow the example of Barcelona and put up a police post in the city centre, where tourists can report a crime to the police in English twenty-four hours a day. Such a post exists in Barcelona on the Ramblas. Paternotte wants a post where police officers also speak French, German and Spanish.

Other proposals by the liberal-democrats

It is indeed ridiculous that a world class city like Amsterdam — in which, according to the guidebooks ‘just about everyone speaks English’ — does not provide English-language information for its international citizens, tourists and business visitors.

By the way, knowing how Amsterdam’s city officials work, we suggest you simply learn Dutch

. You’ll probably master the language long before City Hall spends oodles of money on bi-lingual signs (after a ‘study trip’ to Hawaii for 24 officials and their wives to see how such a program could be implemented).

Category: NewsRelated to: Dutch, English, languageLast updated: Sunday, September 25, 2011 at 1:20 PM, Central European Time (CET)
Transparency:
The DutchAmsterdam website includes affiliate links. That means we get a small commission — at no additional cost to you — for each purchase you make. Your support helps us provide this site free of charge. Naturally, as our Editorial Policy states, our content is never influenced by our advertisers or affiliates.