The Leidseplein (Leiden square) is one of Amsterdam’s premier nightlife and entertainment spots.

Here you will find bars, pubs, coffeeshops, outdoor terraces, theaters, shops, buskers, and so on.

Leidseplein: A Square filled with History

In the 17th century, the square was just inside the Leidespoort (Leiden gate), which marked the end of the highway between Leiden and Amsterdam.

Designed by Amsterdam’s master builder Daniël Stalpaert and built between 1662 and 1664, the “Leydtse Poort” was situated on a spot that lies between the American Hotel and the Hirsch building. The gate was demolished somewhere around 1870.

The square was used to park the carts and carriages of farmers, business men and gentry. At the time it was one of five similar ‘parking lots’ in the city. Horses were looked after by servants and, if necessary, vets. Blacksmiths were on hand to provide new horseshoes, and carpenters made necessary repairs to the carts and carriages. 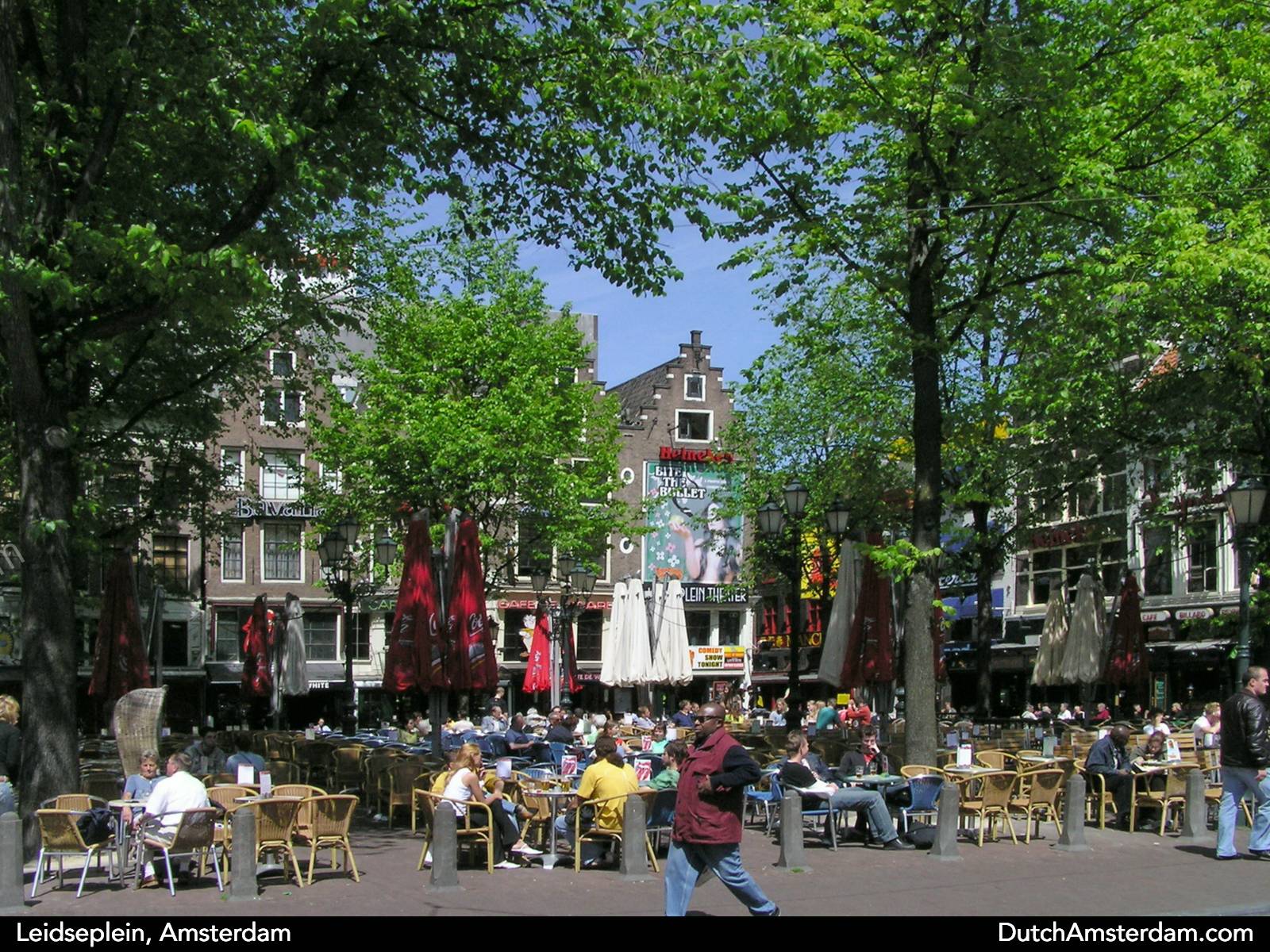 Used in the 17th century as a parking lot for carts and carriages, this area of the Leidseplein in Amsterdam nowadays features outdoor terraces. © Copyright, DutchAmsterdam.nl

Naturally, a plethora of hotels, bars, eateries and various places of entertainment emerged in the area, catering to locals and visitors alike. While much has changed on and around Leidseplein, today the square and its immediate surroundings still function as a hot-spot providing a fantastic mix of cultural venues, night clubs, bars, restaurants, cinemas and theaters.

In June, 1875, the Leidseplein became the starting point of Amsterdam’s first horse-drawn tram line. In August, 1900, the first electric tram was stationed here.

Public Transport (including the Amsterdam Airport Express) at Leidseplein

Video: History of the Leidseplein, Amsterdam

That said, today’s Leidseplein is criss-crossed by trams, bicyclists, taxis and cars. Through the centuries, the square has been transformed into several distinct areas — each with its own character, and at first glance not part of the same square.

There’s the rustic area in front of the 4-star American Hotel, complete with a recently rebuilt fountain. Built in 1900, the hotel is an art nouveau monument. It is usually referred to by locals as the Americaín — in reality the name of its famous Café Americain.

The hotel’s name actually refers to an earlier hotel built in 1880 at the same location — and demolished just two decades later. Its architect had lived and worked in the United States of America, where he gained experience in the hotel business. After his return to the Netherlands he wanted to built an American-style hotel.

Across the street is the copper-domed Hirsch building, which originally was owned by the international fashion house Hirsch & Co. Built in 1909 and opened in 1912, it was at the time the highest retail premises ever built in The Netherlands. At its completion critics accused the architects of merely copying the London department store Selfridges. Nevertheless, the building had a Parisian ‘look and feel’ about it — aided by the fact that everything in Hirsch, personnel and signs included, was French.

Hirsch’s designers visited fashion shows in Paris, and created their own versions back in Amsterdam. Hence here upper-class women came to buy their made-to-measure costumes.

The Hirsch building at one time housed the Hotel Hollandais, but currently the building consists only of retail, banking and office space. Amsterdam’s Apple Flagship store occupies the corner facing Leidseplein. Travelex is gone for good. There are other currency exchange places in nearby Leidsestraat, but for the best exchange rate you should head to Pott Change at Damrak, just a stone’s throw from Dam square.

On that side of the street, the Hirsch building has a wide, tree-shaded sidewalk.

At Leidsekade, just around the corner from Leidseplein, you can board a glass-topped tour boat for a 1 hour tour of Amsterdam’s canals.

Also around the corner is the Hard Rock Cafe. Just saying…

The Heineken Experience is a 15-minute walk from the Leidesplein.

The north-facing side of the building overlooks Leidseplein and the Kleine Gartmanplantsoen — a smaller square featuring a grassy area. On the other side are bars and cafés, as well as the Pathé City cinema (currently closed for remodeling).

Also facing the Leidseplein is the Stadsschouwburg, the Municipal Theater. Traditionally, Amsterdam soccer club Ajax is honored here when its players greet the crowds from the theater’s balcony. In recent years, however, hooligans have used the occasion to riot, attacking police and innocent bystanders, as well as plundering nearby shops and destroying anything they can get their paws on.

Next to the Stadschouwburg is the oldest surviving part of the Leidseplein — a huge outdoor terrace served by several of the pubs and bars that line it. In the far corner is Boom Chicago, a hugely popular english-language sketch and improvisational comedy theater.

Across from this terrace — and separated from it by a busy tramway — is an area set aside for buskers and a handful of street vendors. At this prime location, top-notch buskers take turns entertaining the crowds.

This part of the square features a fashion store, a Burger King, a pancake/sports bar, the Bulldog — a coffeeshop located inside a former police station, and the Heineken Hoek. The latter is a busy, relatively expensive diner/bar with so-so food and drinks. Its redeeming feature is its clean — small change donation appreciated — toilet facilities.

The streets surrounding Leidseplein are filled to overflowing with restaurants offering virtually every kitchen imaginable. The food ranges in quality from fantastic to “they’re-tourists-who-will-never-come-back-anyway.” With so many restaurants vying for your attention, via the type of hustlers more common to Mediterranean countries, you may be able to negotiate a free bottle of wine.

Category: Leidseplein, Southern Canal BeltRelated to: Leidseplein, squareLast updated: Monday, May 18, 2020 at 8:09 PM, Central European Time (CET)
Transparency:
The DutchAmsterdam website includes affiliate links. That means we get a small commission — at no additional cost to you — for each purchase you make. Your support helps us provide this site free of charge. Naturally, as our Editorial Policy states, our content is never influenced by our advertisers or affiliates.