Home > Blog > Giving Starbucks in Amsterdam yet another try

DutchAmsterdam.nl — Everyone who knows us know that we’re not fans of Starbucks. In our opinion the company serves coffee ranging from bad to so-so at high prices.

We’re certainly not the only ones who say so. The London Times in January, 2008 reported “Starbucks is peddling the worst coffee at the highest prices according to a survey of the big three coffee houses on Britain’s high streets.” 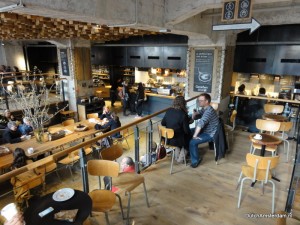 Starbucks at Rembrandtplein in Amsterdam

But in the interest of fairness I’m always willing to give them another try. Since I was in the neighborhood anyway, the other day I dropped in at the new Starbucks location on Rembrandtplein in Amsterdam.

The store is situated in a 430 square meter (4,500 sqf) subterranean space in what used to be the vault of the ABN Amro bank.

Hence this Starbucks store is known as … wait for it … The Bank.

This is the third and largest Starbucks in Amsterdam. Other stores are located in de Leidsestraat and de Beethovenstraat. (Technically the three Starbucks stores at Amsterdam Airport Schiphol are not in Amsterdam).

In its press release the company said

A large beautiful store inspired by contemporary Dutch culture and its deep coffee tradition, The Bank was purposely created to push Starbucks beyond its comfort zone in terms of innovation and experimentation. What works in the Amsterdam store will make its way to the rest of Europe.

I’m not sure what kind of experiments they’ve got in mind, but the store does feature Starbucks’ first ever Clover brewing system in Europe. The Clover is an $11000 coffee machine that brews a good cup of coffee. Obsessive coffee lovers swear by it, and in March 2008 Starbucks went ahead and bought the Coffee Equipment Company — the Seattle-based startup that makes the Clovers.

But any machine is only as good as the beans you put in it, and that is where people — myself included — say Starbucks falls down.

Coffee snobs are skeptical. “Clover will differentiate them from the Dunkin’ Donuts, the McDonald’s,” says Tony Konecny, an industry consultant who runs the coffee blog Tonx.org and was one of the first to see a Clover prototype. “But it comes down to the coffee.” The machine is only as good as the beans you put in it. Which is a problem for Starbucks, a chain that purchases coffee in mass quantities and can’t deliver fresh bags of beans as quickly as the indie cafés. Then there’s quality control: “By the time the customer experiences it, the beans have been blended and have been sitting in a bag for six weeks. Anything special about the coffee is lost.”

As for me, I’d like for Starbucks to first get its ‘normal’ cups of coffee right before I fork over even more money for a Clover-brewed extract.

Anyway, the Clover is part of the store’s Slow Coffee Theater — where you can also get French Press of pour-over filter coffee:

I must say the ambiance of The Bank is OK. It has some nice design elements, and the large amount of space even manages to look somewhat gezellig.

It was lunch time, and I was surprised to see relatively few customers.

Yet despite the fact that it wasn’t busy, the ordering process was a bit tedious (as so often). There were plenty of people behind the counter but it took a while before my order was taken. 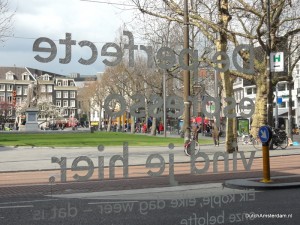 Though you won't see it when you sit down, Starbucks overlooks Rembrandtplein. The text on the windows promises that "you'll find the perfect espresso here."

Then someone else asked several times whether I really wanted an espresso macchiato. Well, I actually wanted a caffè macchiato, but from experience I know that Italian is not Starbucks’ strongest point. If you simply order a macchiato you get a something resembling latte, which they have elected to call a latte macchiato.

There were just four customers ahead of me, one of whom was assured that his coffee would be ready in four minutes since they were ‘making it fresh.’ I was glad I had not elected to drink something from the Slow Coffee Theater.

What I eventually was given resembled — in look and in taste — a small cappuccino. It wasn’t bad (I’ve had worse at Starbucks), but it wasn’t good either, and I certainly did not get what I wanted to get: a caffè macchiato.

As before, at Dutch Amsterdam we still recommend you get your coffee fix elsewhere.

On the way home I wanted to exorcise the aftertaste of Starbucks’ macchiato. So I made a brief detour across the IJ river behind Central Station in order to visit one of our favorite coffee spots in Amsterdam: Al Ponte.

There I ordered, received, and thoroughly enjoyed a fantastic, proper caffè macchiato — brewed by Emmanuelle, a genuinely Italian barista.

Starbucks may have a better marketing department, but their coffee isn’t half as good — if that — as the coffee served at Al Ponte.

Category: BlogRelated to: Al Ponte, coffee, StarbucksLast updated: Saturday, October 24, 2015 at 6:10 AM, Central European Time (CET)
Transparency:
The DutchAmsterdam website includes affiliate links. That means we get a small commission — at no additional cost to you — for each purchase you make. Your support helps us provide this site free of charge. Naturally, as our Editorial Policy states, our content is never influenced by our advertisers or affiliates.