Amsterdam – As building plots are getting increasingly scarce in waterlogged Amsterdam, its people have rediscovered the floating home.

A model floating home is currently moored near the historic building of the Scheepvaartmuseum, the shipping museum. [Make that the Maritime Museum – DA] In the coming weeks, the public can visit the modern version of Amsterdam’s traditional wooden houseboats.

Next year the first 38 families are due to enter their new homes floating on the IJ lake near Amsterdam city centre. They are the first of 100 homes that will be floating at the shores of IJburg by 2010. 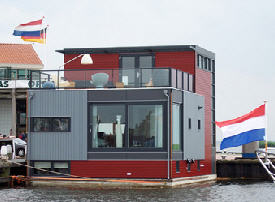 Model of the ‘waterwoning’ — a floating home.

IJburg is an artificial island built in the IJ lake in the past years. The floating homes will be located in the calm waters between IJburg and the mainland.

“More than 1,000 people have requested information about the homes and 361 have subscribed as potential buyers of 38 homes,” Goethem says. We used a lottery to determine who could ultimately buy a lot.”

People living on houseboats spend 33 per cent of their income on their home, 3 per cent more than those living in ordinary homes.

Nevertheless, houseboats have always been very popular in Amsterdam, with demand being consistently higher than supply.

Last year, the city of Amsterdam decided to create 100 more water plots for houseboats in existing neighbourhoods. But even that will not be enough to meet the demand.

So far, city administrators have not supported increasing supply in greater numbers. Chances are, however, this may change in the coming years.

Due to recent climate changes, the water levels of the rivers flowing into the Netherlands from Switzerland, Germany and France have risen quite substantially.

If the Dutch want to prevent the flooding of existing developed areas, they need to build more canals and ditches.

More canals and ditches are also built in newly developed areas, such as the Leidsche Rijn expansion of the city of Utrecht in the central Netherlands.

“You basically create undeveloped land exactly where you need to build most,” Sprenkeler adds.

This is where floating homes come in. They can be built in areas where demand for residential homes is high, but also on rivers, canals or lakes.

“Demand for residential floating homes is rising dramatically. Last year, we built 40 homes, this year we will build 60 homes and we hope to build 250 homes within the next few years,” Sprenkeler says.

“But we do not limit ourselves to residential projects. We also build floating offices or recreational buildings, such as a sailing club,” she adds.

Floating homes are basically concrete frames, that can be shaped in any form or size and adjusted entirely to personal wishes. Using concrete in a houseboat is not a new concept. Some Dutch houseboats dating from the early 20th century use the same method.

“It requires hardly any maintenance,” says Sprenkeler. “Also, each house we build for IJburg, is unique. Homebuyers work with us to create a home meeting their personal taste and budget.”

Compared to house prices in similar locations near Amsterdam city centre, prices of the floating homes are relatively cheap.

The model home has three bedrooms, two bathrooms and 2.6-metre high ceilings. The home is equipped with the newest technology, such as floor heating and an advanced cooling system integrated in the ceilings.

However, with good insulation and the bedrooms located 1.5 metres below water level – cool in the summer and warm in the winter – artificial heating or cooling is hardly necessary.

“Our floating homes are slated to use 15 per cent less energy than regular homes,” says Sprinkeler.

Share what you know about houseboats and floating houses.

Category: NewsLast updated: Sunday, September 25, 2011 at 1:33 PM, Central European Time (CET)
Transparency:
The DutchAmsterdam website includes affiliate links. That means we get a small commission — at no additional cost to you — for each purchase you make. Your support helps us provide this site free of charge. Naturally, as our Editorial Policy states, our content is never influenced by our advertisers or affiliates.