DutchAmsterdam.nl — The Dutch government has decided that coffeeshops in the Netherlands will no longer be allowed to sell high-potency weed and hash.

Cannabis products containing more than 15 percent THC, the main active chemical, will be classified alongside hard drugs such as cocaine and ecstasy.

It has not yet been announced when the measure will go into effect.

About 80 percent of the current supply of marijuana and hashish sold in Holland’s coffeeshops contains more than 15 percent THC, says Trimbos, the National Institute of Mental Health and Addiction in the Netherlands.

The institute annually samples the levels of THC of weed and hash sold in Dutch coffeeshops — establisments where soft drugs are legally sold and used. According to its most recent report, published in 2010, the average THC content ranges between 15 and 18 percent.

The concentrations in imported weed and hash are lower but the strength of foreign hash is still too high. Trimbos researchers conclude that the strongest weed is the most popular among customers. “Buyers ask for the bestselling and the strongest weed,” they say. 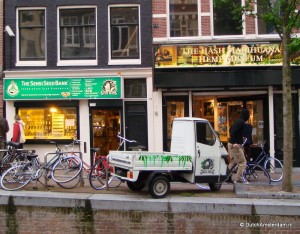 Hash, Marijuana and Hemp Museum in Amsterdam, next to a seed shop

The TCH levels of Nederwiet have been slowly decreasing since 2004. By comparison, in the US the average THC levels of marijuana is around 10 percent and is steadily rising.

Proprietors of coffeeshops say that since levels of THC can only be determined via laboratory tests there is no practical way for them to test whether any given batch has too high a concentration.

Dutch news agency ANP quotes the spokesperson for the Grass Company, a chain of coffeeshops in the south of the country, as saying that Nederhash (Nether-Dope) will likely disappear from their shops — along with two kinds of imported hash and two kinds of Nederwiet.

Possession and use of marijuana is technically illegal in the Netherlands, but police do not prosecute people for possession of small amounts, and it is sold openly in licensed, so-called ‘coffeeshops.’

Technically it is not legal for people to supply the coffeeshops with soft drugs, nor is it legal for coffeeshops to purchase the drugs. The whole system has been tolerated in an effort to protect users of soft drugs from pushers of hard drugs.

Yet this approach, sometimes referred to as ‘legal front door, illegal back door,’ has resulted in the involvement of criminal gangs in the supply chain. [See: The connection between Amsterdam’s coffeeshops and organized crime]

The onus for compliance with the new measure falls squarely on the shoulders of the coffeeshops themselves. Ivo Opstelten, Minister of Security and Justice, says that shouldn’t be any problem since coffeeshops already work with memus listing the available varieties and their properties.

Owners of coffeeshops where banned varieties are sold after today run the risk of prosecution and their shops could face closure.

Nederwiet is Marijuana cultivated in the Netherlands and known for its high THC potency, which in some varieties of Cannabis approaches 30 percent. 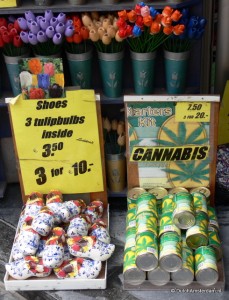 Grow your own Cannabis

It accounts for nearly three-quarters of sales in Holland’s coffeeshops.

The government says that the country’s tolerant soft drugs policies were developed long before Nederwiet became much more potent.

In the late seventies and early eighties Nederwiet had an average THC concentration of 8 percent. Wikipedia says that “In the 1990s students of the Dutch University of Agriculture in Wageningen did research and increased the concentration of THC to around 25 percent. This result was afterwards adopted by the market with a current average tendency of around 20%.”

The Trimbos Insitute, which advises the Dutch government, says that high levels of THC increase the risk of addiction and psychotic disorders.

The new measure is another sign that the Netherlands’ traditional tolerance of soft drugs is becoming a thing of the past. Observers say the new tough approach is being driven by the increasingly influential conservative and far-right parties in Dutch politics.

Starting next year the Dutch government also plans to ban tourists from entering coffee shops by introducing a membership system open only to citizens of the Netherlands. Amsterdam is among several cities that oppose the measure.

The government also wants to establish a minimum distance of 350 meters beween cannabis-selling coffeeshops and the nearest school.

Category: Coffeeshops, NewsRelated to: cannabis, Coffeeshops, hash, marijana, THCLast updated: Thursday, March 22, 2012 at 4:05 PM, Central European Time (CET)
Transparency:
The DutchAmsterdam website includes affiliate links. That means we get a small commission — at no additional cost to you — for each purchase you make. Your support helps us provide this site free of charge. Naturally, as our Editorial Policy states, our content is never influenced by our advertisers or affiliates.