A Dutch amateur archaeologist believes his research shows that Amsterdam is at least 200 years older than originally thought.

Amsterdam began as a fishing village in the late 12th century. Legend has it that two Frisian fishermen landed on the shores of the river Amstel and decided to settle there. 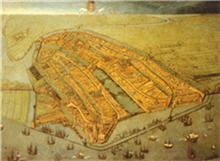 Painting of Amsterdam in 1538

Others joined them, and as the settlement expanded the decision was taken to dam the Amstel to control flooding. The city’s name is derived from the Amstel Dam.

However, amateur archaeologist Piet van Reenen, says he has found indications — in archives and on old maps — that part of the Amstel was dredged at an earlier date.

Van Reenen also discovered that the Linnaeusstraat, formerly known as the Oeterwalerdijk (outermost dyke), must have been the city’s oldest street. [Seen here on Google Maps, with the Amstel river to the left.]

Professional archaeologists are impressed with Van Reenen’s findings, but are calling for extensive soil testing before they concur.

The traditional founding of the city of Amsterdam is 27 October 1275, when the inhabitants living around the Amstel dam were granted freedom from paying the tolls associated with the locks and bridges of Holland. It was given city rights in 1300 or 1301. From the 14th century on, Amsterdam flourished.

For an accessible history of Amsterdam see Amsterdam — A Brief Life of the City, by Geert Mak

Category: NewsLast updated: Sunday, September 25, 2011 at 1:58 PM, Central European Time (CET)
Transparency:
The DutchAmsterdam website includes affiliate links. That means we get a small commission — at no additional cost to you — for each purchase you make. Your support helps us provide this site free of charge. Naturally, as our Editorial Policy states, our content is never influenced by our advertisers or affiliates.