Pickpockets can ruin your vacation in an instant

Table of Contents hide
1 Pickpockets can ruin your vacation in an instant
2 Underaged and/or Foreign Pickpockets
3 Money Belts and other anti-theft travel products
4 Electronic Pickpocketing
5 What to do if you have been robbed
6 Fake Policemen
7 But also: Fake TV — Scam City broadcast was a Scam
8 Plus… Anti-Pickpockets Police
When it comes to pickpockets, Amsterdam is no different from other major (and not so major) cities. Tourists and locals alike have to be alert and take reasonable precautions against being pick-pocketed.

However, the true number of victims is much higher, since many people don’t even bother filing a report.

Having your wallet and/or smart phone — or an entire bag or suitcase — stolen can ruin your vacation. You’ll have to find a way to obtain cash, replace your debit- and credit cards, worry about the passwords and other private information on your phone, and possibly obtain a new passport and other identification papers.

As the saying goes, an ounce of prevention is worth a pound of cure.

First line of defense: be alert. It can happen to you. 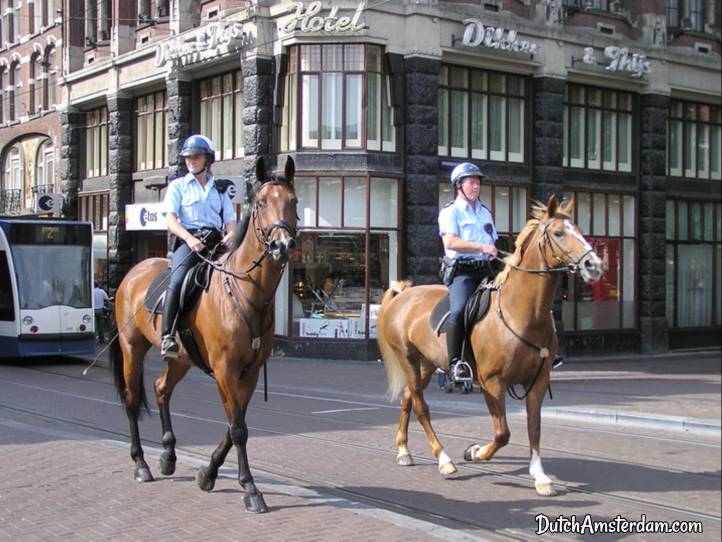 In Amsterdam you’ll see police patrol the streets on foot, on bicycles, on motorbikes, in cars, on inline skates, and even on horseback.

In recent years, Amsterdam has seen a sharp increase in underage pickpockets, often operating in groups.

Police has arrested groups of children as young as 9 — many of them from Romania. Authorities believe the kids are not acting on their own initiative.

Salient detail: in the Netherlands children under the age of twelve cannot be prosecuted.

Romanian pickpockets are so over-represented in Amsterdam that police officers have been flown in from Romania to help patrol the streets during recent King’s Day celebrations.

Statistics Netherlands (CBS) reports that nine out of ten pickpockets arrested in Amsterdam do not have a home address in the Netherlands.1

In terms of crime, Amsterdam is the most dangerous city in the Netherlands. Nevertheless, it consistently scores high on Quality of Living surveys.

Almost everyone who has been pick-pocketed thought it could never happen to them.

But it is not for nothing that countless travelers use money pouches and/or other anti-theft products.

Use one that is comfortable enough to wear for long periods of time, such as this money belt made of silk. Some cheaper products are so uncomfortable that you may be tempted not to use them the next day.

This belt features a sweat-resistant coated satin lining. You may not think you need that in a place like Amsterdam, but it does get hot and humid over here, and if you’re inclined to transpire while walking or bicycling you’ll appreciate the fact that the liner prevents your cash from being liquidated (so to speak).

That said, even when using a money belt it is best not to carry large amounts of money on your person – especially if you expect to be out deep into the night. Trying to make your way back to the hotel – after a few drinks and perhaps a joint – you may well be an easy target for a mugger.

Note that money belts and pouches are usually meant for use as ‘long-time’ storage. You’ll want to keep a small amount of cash and a credit card on hand in, perhaps, a chained wallet.

We do not recommend the use of neck pouches — unless you get one that others like. Cheap models tend to be uncomfortable and are more easily spotted. Worse, you wouldn’t be the first person to have one ripped off your neck by a fast-footed opportunity thief.

Women may be interested in a silk bra stash, or even underwear with secret pockets in the front.

Also check out these anti-theft bags

Note: even if you have a bags with zippered compartments, be aware that pickpockets are very skilled at opening those zippers. If you do have zippered bags, at the very least make sure you secure the zippers with carabiners.

Insist on carrying your wallet in a back pocket? That’s asking for trouble. Buttons or zippers usually form no obstacle for thieves. However, securing your pockets with strips of sewn-in velcro usually is quite effective.

By the way, we sometimes get asked this question: Why should I use a money belt or other anti-theft device when the locals apparently do not use them?

Answer: As a tourist you cannot help but stand out. Thieves target tourists because the latter usually carry large amounts of cash.

Tip: Even when using money pouches and related products, do not put all your cash and credit cards in one place. Also: do not keep PIN codes with your credit- or debit cards.

Do you carry debit- or credit cards with embedded RFID chips? A convenient feature of such cards is that you can pay small amounts by merely swiping the card past a pay terminal.

Reportedly, some thieves make use of that same technology by swiping handheld devices along pockets and handbags in the hope of quickly withdrawing small amounts from such cards.

For that reason many people make sure to use RFID-blocking wallets.

What to do if you have been robbed

If you have become a victim of petty theft, such as pickpocketing or purse-snatching), you will need to find a police station, where you can report the crime. Just ask a local person for the nearest one. 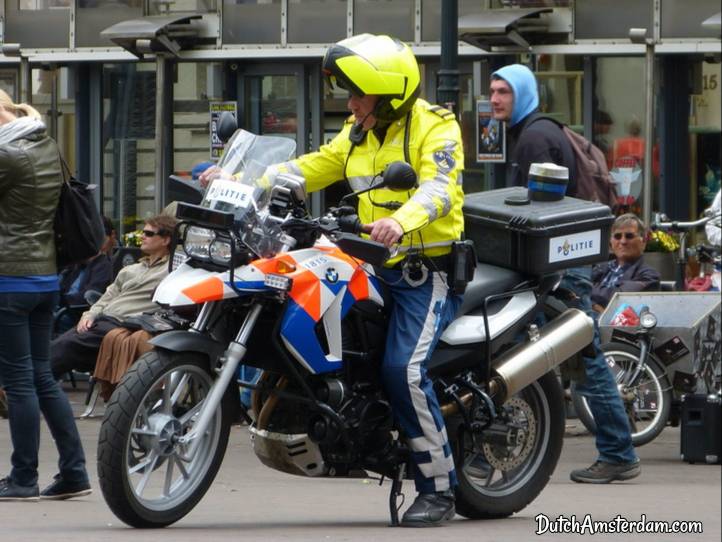 Many older guidebooks suggest that you should contact ATAS — Amsterdam Tourist Assistance Service — at Nieuwezijds Voorburgwal. However, that service no longer exists.

If you can bring someone along to interpret for you, by all means do so. Quite often the myth that ‘everyone in Amsterdam speaks English’ comes to a screeching halt when confronted by a bunch of police officers who can’t (or won’t) speak it well enough to be of any use.

The process of filing a report can be quite tedious. Just keep in mind that you need a copy of the report for your insurance company.

If your identity papers were stolen, contact your embassy or consulate.

If your credit cards were stolen, follow your bank’s instructions.

Besides tiny pickpockets and blunt-force muggers there’s another phenomenon you will have to take into account. In recent years, many tourists (and a few locals) have been mugged by policemen. Fake policemen, that is.

Newspaper reports generally state that these folks – dressed up in uniforms ordered new or second-hand online – hail from such countries as Bulgaria, Romania, Russia, and the Ukraine. But as a tourist yourself, you may not know the difference between them and the real cops (especially when you take into consideration that Holland is a multi-cultural society).

These fake cops want to see your wallet — usually just after you have withdrawn money from an ATM or changed cash at a currency exchange). They tell you they are investigating a fake money scam, and that they want to make sure you have not just received counterfeit bills.

If this happens to you, rest assured that you are about to be separated from your money.

Here’s what you should do:

But also: Fake TV — Scam City broadcast was a Scam

If you’ve seen the Amsterdam edition of Scam City, presented by Conor Woodman and broadcast by National Geographic, you have essentially been scammed.

Conor Woodman says that in all of his travels, Amsterdam has been “one of the darkest places I’ve visited.”

It’s a lot less dark now that he is gone.

April 24, 2014: the anti-pickpocketing team of the Amsterdam police force has been declared “Law Enforcement Unit Of The Year” by the International Association of Financial Crimes Investigators (IAFCI).

The team, whose members rotate in order to lessen the chances of being recognized, is often seen in action in the downtown area.

This article was first published on January 21, 2007. It is kept up-to-date by Anton Hein.

Category: Crime and SafetyRelated to: crime, Crime and Safety, safetyLast updated: Friday, March 31, 2017 at 7:02 AM, Central European Time (CET)
Transparency:
The DutchAmsterdam website includes affiliate links. That means we get a small commission — at no additional cost to you — for each purchase you make. Your support helps us provide this site free of charge. Naturally, as our Editorial Policy states, our content is never influenced by our advertisers or affiliates.